The power of the ring – when they know you’re engaged 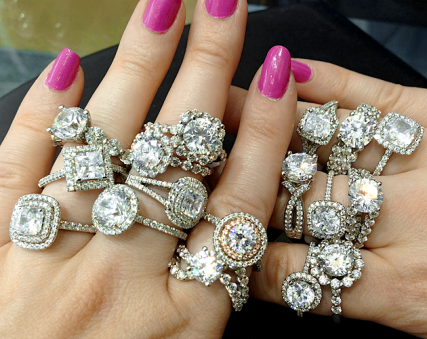 An engagement ring has some obvious perks. It looks pretty, your parents leave you alone for a while (just for while, the having kids topic is waitinqg just around the corner) and most importantly it makes some ladies around you jealous. The most useful function of the engagement ring, however, is protection from unwanted attention.

You’re having drinks with your friend and you just want to have an intimate evening, the two of you. Yet, the single bar goers are forever on the hunt for new women and they assume that the “two lovely ladies”can’t be genuinely enjoying each other’s company. He’s nearly sure that they came there to pretend that they’re having fun but in fact are just on a lookout for a man. You can see him approaching with a very confident look and a certain sway of his less bulky than he thinks arms. He comes to your table and opens his mouth when his stare stops at your left hand and your engagement ring. He immediately looks in a different direction pretending that his closeness to your table was a mere coincidence. You two can enjoy the uninterrupted conversation without answering to cheap pick up lines. All that thanks to the power of the ring.

It’s not the only situation in which it comes handy. What may come as a surprise to many is that some women in relationships still want to expand their social circles. Especially as an expat you tend to appear at various events related to your interests or simply aimed at networking and meeting new people. When you see that a guy is interested and yet you have a boyfriend you have to somehow slip the detail in so that he doesn’t get his hopes up. It usually ends up being an awkward sentence in a conversation for example about wine farms such as “Oh yes, me and MY BOYFRIEND went to a lovely one recently”. Some guys will look disappointed, some will quickly finish a conversation and drift to other, hopefully single, ladies, few will passively aggressively mention something about not caring about it. In either situation it can be awkward. An rgagement ring sorts this problem out. One look at your left hand is enough for him to know what your relationship status is. That way he can make a decision whether his willing to entertain a conversation for the pleasure of it or are you a time waster in his mind.

In the difficult world of dating where knowing someone elses’s status isn’t always easy, an engagement ring is something that can make a life of a single man simpler. He doesn’t have to embarrass himself hitting on a lady that’s unavailable and she doesn’t have to politely yet firmly reject his attentions. I must say that even before I was engaged or even in a relationship I did use my grandmother’s ring for deterrent purposes when I really wasn’t interested and a guy was of the kind that didn’t understand that you not having a partner doesn’t equal you being interested in him.

What do you think, Dear Rinsers? Are engagement rings/wedding rings a great solution to avoid awkwardness? Should married/engaged people always wear their symbols of relationship status?