I Kissed a Girl (and I Liked It) 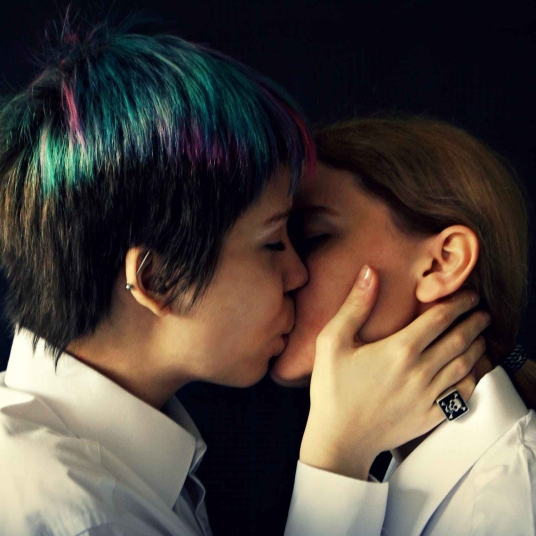 No, I did not break the monogamy of my marriage nor I intend to. However, the series “Tales of the City” got me thinking about how my life could have gone had I been born in a more open-minded place.
Where I come from (Poland!) being gay is still unfortunately not socially acceptable. There are pride events that happen there but they’re strongly disapproved of by the conservative, Catholic majority.
It’s certainly easier to be gay (not to say easy) in big cities such as Warsaw. I know only two homosexual couples and, even though their lives can’t exactly be described as bed of roses because of the legislation that doesn’t recognise their relationships, they manage to live there mostly undisturbed. Which is obviously sad as a criterium.

Anyway, such a conservative environment is certainly not encouraging towards experimentation and finding out your preferences are. I somehow feel that a bisexual person may be more willing to just follow the majority rather than try to find out who they’re really into or even allow themselves to enter a homosexual relationship should such an opportunity arise.
Love doesn’t listen to bigotry and in my teens I fell in love with one of my best female friends. We had an intense female friendship for a while until I realised I had feelings for her which were more than friendly. I remember vividly worrying about what to do about that:

1) I was pretty sure she wouldn’t reciprocate my feelings and she was straight
2) Even if she reciprocated…well, we lived in Poland I honestly didn’t know any lesbians or openly bisexual people at that time. Everyone was straight so I didn’t even know that there was another option
3) I was considering suicide as the best solution, if the feelings don’t go away

But then a certain young man crossed my path and my feelings for my friend started to fade. I felt relieved but unsure what to make of this feeling. I remember reading somewhere that a completely heterosexual person can fall in love with a person of the same gender because of that person’s qualities and I accepted it as my solution.

I continued on the heterosexual path until university, when my girlfriends discovered that making out with women was fun. Some people think that it’s always done to show off or to get the attention of men but I think that more women actually truly enjoy it than they would like to admit it.
I guess it allows some space for trying to find your preferences but… to a point. When one of my friends admitted that they really enjoy it and that it’s better than doing it with men and she was publicly shamed for that. I liked it not more than with random men but not less either.
At the same time I was not attracted to women I saw on the street but sometimes I’d feel attracted to a man and in general the ratio of my attraction would be around 50 men to 1 women. What does that make me? I still don’t know. That I never had sex with a woman means nothing; it was outside of what was allowed in the context I described.

Then there was a girl I met in South Africa that I made out with “for fun”, who as it turned out had a crush on me. I was actually interested but wasn’t willing to consider a relationship with woman.
Was it social conditioning from back when I was younger? Or the the fact that South Africa may be open-minded in many ways but in the mostly Afrikaans environment I was hanging out with it wasn’t? I was curious to try things out between us to a similar extent I’d be curious with a man I fancied, but I didn’t. After that I never really met a girl I liked quite a bit more so I dated guys until I met my husband with whom I’m very happy. Still, the question remains, who would I have been with, had I been born in let’s say, San Francisco. Also, am I bisexual, if my general preference are men?

The point of my story is that I think in many places society makes it difficult for people to try to discover what they truly enjoy in life and yet, fulfilment in love and sex is a crucial ingredient of happiness.
If you’re conditioned all you life into thinking that there’s only one choice it’s not easy to see other options. For girls, the explorations are somewhat okay within limits.
For instance, did you know that two Spice Girls members had sex? Well, now you do. And yet, even they kept it a secret up until now and even now they laugh it off.
This is because such “acceptance”, doesn’t make it any easier for women who are actually lesbian or bisexual or just interested in entering a relationship with another woman.

I don’t feel terribly hurt by these events in my life because they led me to a place where I am right now. I’ve had my fair share of sexual experiences and honestly I don’t think sleeping with more women or men wouldn’t change that much BUT it makes me think that there’s a sexual spectrum that escapes labels and some people could feel pretty unfulfilled.
Especially for boys, it’s considered by many completely unacceptable to experiment, however innocently, with other boys. What’s this double-standard about? Just ask people, they’ll tell you. A girl who kisses a girl may not be a lesbian but a guy who kisses a guy is definitely is gay and similar rubbish. Of course, such ideas come from homophobia in the first place – because what’s wrong if they realise they are, in fact, gay?
I really wonder whether these boxes really benefit anyone. Are people who create them just scared who they would be if they allowed themselves to come out of them? What do they feel these boxes protect them from?

Okay, Rinsers, I know I’ve asked as many questions in this post as I’ve given answers but I’ve never pretended to be all-knowing. Let me know your thoughts on this issue! Have you ever sexually experimented with people of your own gender? Do you wish you’ve experimented more? And if you claim to be 100% heterosexual or homosexual, how do you know that for sure?